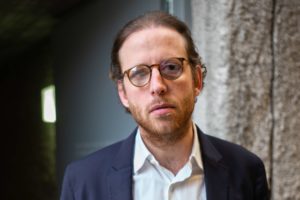 König was born in 1981 to an illustrator mother, and to an art professor / museum director father. In his youth König was already very influenced by the artists his father, Kasper König, worked with – among others: Dan Graham, On Kawara, M.C. Escher, Richard Artschwager, Joseph Beuys, and Jörg Immendorff.

He opened his first gallery in Berlin in 2002 which moved from Rosa-Luxembourg-Platz to Dessauer Straße, and lastly in 2015 to Alexandrinenstraße in the Church St. Agnes. The brutalist church was built in the 1960s by the German architect and city planner Werner Düttman It was recently converted into the exhibition space as we know it today by the architect Arno Brandlhuber. The gallery currently represents 40 international emerging and established artists and has featured the works of many prominent international artists such as Katharina Grosse, Claudia Comte, Elmgreen & Dragset, Chiharu Shiota, Jeppe Hein, Alicja Kwade, and more. König has appeared repeatedly in Art Review’s Power 100 List.

König is not only based in Berlin but internationally. In 2017, he opened his first London gallery in a former underground carpark located in Marylebone. In 2019, he opened a third space, located in the MCM-building in Ginza, in Tokyo.