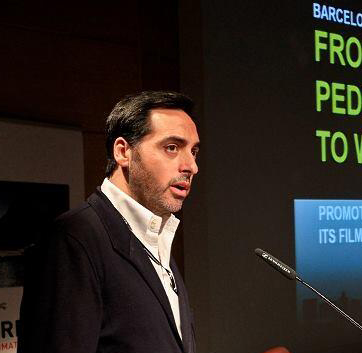 Llucià Homs is a cultural consultant, a curator, and an art dealer. In 2011, he founded Talking Galleries and was director of its 1st edition, held in Barcelona in September of that year. From July 2011 to June 2015, he was the Director of the Promotion of Cultural Industries at the Culture Institute of the Barcelona City Council (ICUB) and Director of La Virreina Centre de la Imatge. Homs studied law at Barcelona University and attended the postgraduate programme ‘Curatorial and Cultural Practices in Art and New Media at the Media Centre of Art and Design (MECAD). In 1993, he opened his own gallery in Barcelona. Since 1999, the Llucià Homs gallery, located on Consell de Cent Street, made a firm commitment to young artists of different nationalities. He was one of the founders of the Loop Festival in 2003 and managing partner of La Fàbrica Barcelona. He has been vice president of the Union of Art Gallerists in Spain and a member of the Board of the Federation of European Art Galleries Association. On September 2016 he takes over as the new director of Talking Galleries. Every Sunday he publishes an article in the Spanish newspaper La Vanguardia on current issues in the international art market. www.lluciahoms.cat