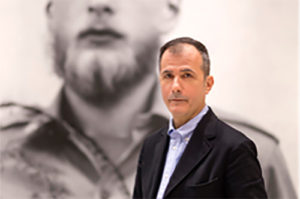 Martin Bethenod is Managing Director of the Bourse de Commerce – museum of the Collection Pinault – Paris to open in 2019. He is also the CEO of Palazzo Grassi – Punta della Dogana (Venice), a position he has occupied since June 1, 2010. Bethenod previously worked in a number of roles in the worlds of art and culture. He began his career as project manager assisting the director of cultural affairs for the City of Paris (1993–96), going on to work as chief of staff for the president of the Centre Pompidou (1996–98) before creating and chairing the department of publications at the museum (1998–2001). He also worked at the French Ministry of Culture and Communication, as arts delegate (2003–04). From 2004 to 2010, Bethenod was the general director of FIAC (International Contemporary Art Fair, Paris), which he steered into its current position as one of the most important international art events.